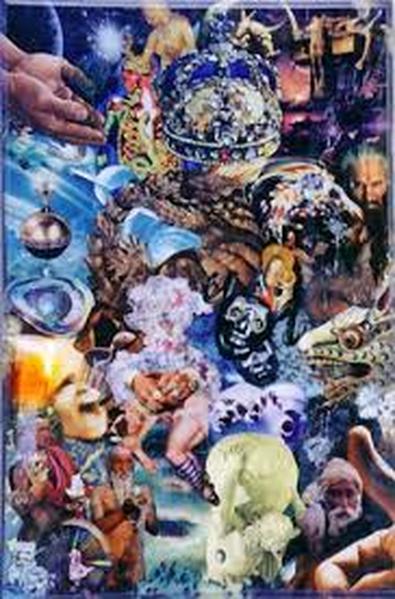 This is the story of the family and the diverse characters that populate the many branches of our family tree. ... Even if medieval genealogies connecting ancient kings to Adam are pure invention, they retain certain psychic values that are part of the archaeology of the collective .... These images are our prima materia.

The symbolical names of the prima materia all point to the anima mundi, Plato's Primordial Man, the Anthropos, and mystic Adam. Adam Kadmon is the "man of light" and therefore identical with the alchemical filius philosophorum.

Paracelsus says of this astral man, "the true man is the star in us. Prima materia, is "the animal of earth and sea," or "man," or "part of man," that is his hair, blood, and so on. Dorn, student of Paracelsus, said prima materia was "Adamica," which coincides with Paracelsus' limbus microcosmicus.

The secret of alchemy is that it is a personal journey of transformation, and cannot be explained but only experienced.  It is "eating the dish," not just reading about it in an alchemical cookbook.  Its effects must be channeled into spiritual growth, for if alchemy is used to gratify personal desire the work is lost.  This means the ego gets inflated with its own importance when the real power source lies within the Self.  This naturally produces a regression back into an unconscious state, back to the prima materia, raw psychic material.  The instinctual urge for growth and transformation lies within us.  For this urge to be considered evolutional requires that the ego must cooperate quite deliberately and consciously with the Self.  This leads toward self-realization.
The main purpose of the Opus is "to create a transcendent, miraculous substance which is variously symbolized as the Philosopher's Stone, the Elixir of Life, or the universal medicine (panacea).  The procedure is, first, to find the suitable material, the so called prima materia (lead), and then to subject it to a series of operations which will turn it into the Philosopher's Stone (gold)." (Edinger, 1978).

The First Matter is a homogenous unity of Mercury, Sulfur and Salt.  It is therefore 'three,' but can also be expressed as 'four' elements, which are again essentially 'one.'  Jung felt that the secret of the psyche was contained in this question of the 'three' and the 'four.'  In alchemy it is expressed as the axiom of Maria Prophetessa:  "Therefore the Hebrew prophetess cried without restraint: 'one becomes two, two becomes three, and out of the third comes the One as the fourth.'"  Today, physicists echo this statement when they call 'plasma' both the fourth and first state of matter (the others being liquid, gas and solid).

In Jungian psychology, the prima materia is the original undifferentiated condition of ordinary consciousness, which is really unconsciousness -- subjective awareness.  Mystics of all times have repeated that in the ordinary state we are all asleep or even "dead" to the true Reality.  In psychology the four-fold nature of the prima materia is expressed by the four functions which correspond with the alchemical elements: intuition (fire), thinking (air), feeling (water), and sensation (earth).  In Jungian theory we have a dominant function and limited access to one or two others, but the fourth function is inaccessible, elusive, maladapted, or hard to integrate.  It is what keeps us from "getting it all together."  Thus, we are out-of-balance.

Balancing the four functions means achieving an integrated personality, harmony and well-being.  This requires undergoing a symbolic process of the union of opposites, which is what both alchemy (and Tantra) and Jungian analysis are all about.  Both alchemy and Jungian psychology require a period of depth analysis (solutio) to distinguish the original, undifferentiated contents.  The ego learns what part of the personality comes from itself and which parts from the Self.  It reflects on its own component parts (subpersonalities) and learns to see itself as a small part of a greater whole, the larger unity of the Self.  Edinger says, "The fixed, settled aspects of the personality which are rigid and static are reduced or led back to their original, undifferentiated condition as part of the process of psychic transformation," i.e. back to a state of 'innocence.'
Further, Edinger compares the problem of discovering the prima materia to the problem of finding what to work on in psychotherapy.  He gives some hints:

(1)  It is ubiquitous, to be found everywhere, before the eyes of all.  This means that psychotherapeutic material likewise is everywhere, in all the ordinary, everyday occurrences of life.  Moods and petty personal reactions of all kinds are suitable matter to be worked on by the therapeutic process.