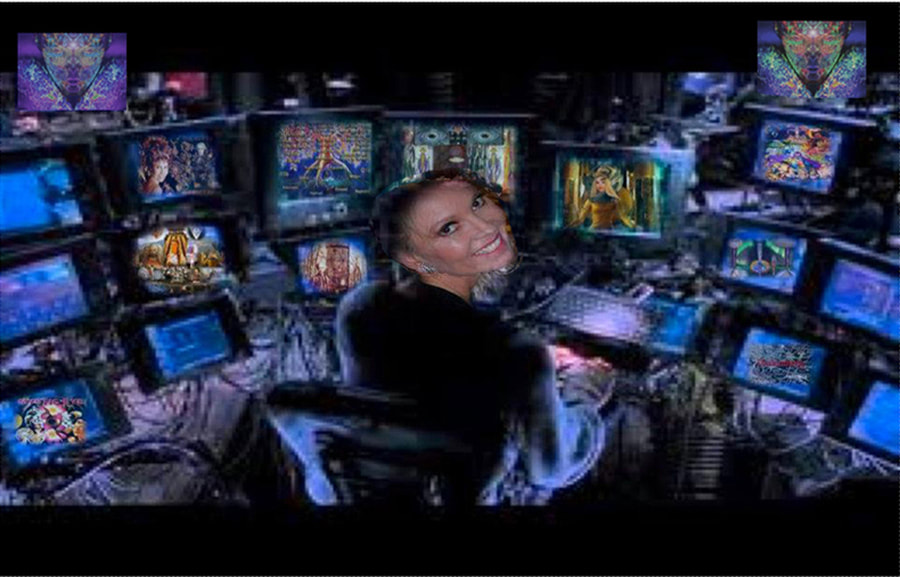 I have been a “Qabalististic artist” for over 50 years. That is to say, Qabalah is the primary thread that weaves through all my graphic and written work one way or another. The history of Hermetic philosophy in Visionary Art is very rich, an often unconscious esoteric current that pervades Western art from the Renaissance forward. Similar symbolic imagery always permeated Eastern art under different philosophies.

Even Botticelli, Michaelangelo, Titian, Ficino, Blake, Tchelechew, Grey, and others owe a debt to the Hermetic revolution and philosophical syncretism. The Renaissance was about developing a stereoscopic perspective, and the task of today’s visionary Digerati is to take that vision hyperdimensional. As ever, it is all about recontextualization and multisensory evocation of psychobiological states.

Great art has impact; it stops us in our tracks with aesthetic arrest, then leaves an aesthetic afterglow. It concentrates transformative insights in skillful, original forms. For the visionary, art becomes a literal description of extreme mindbody states. Mission is committed vision. With a perceptual acuity tuned to discovery, the artist beckons the viewer further, to share her vision, albeit, in silence. 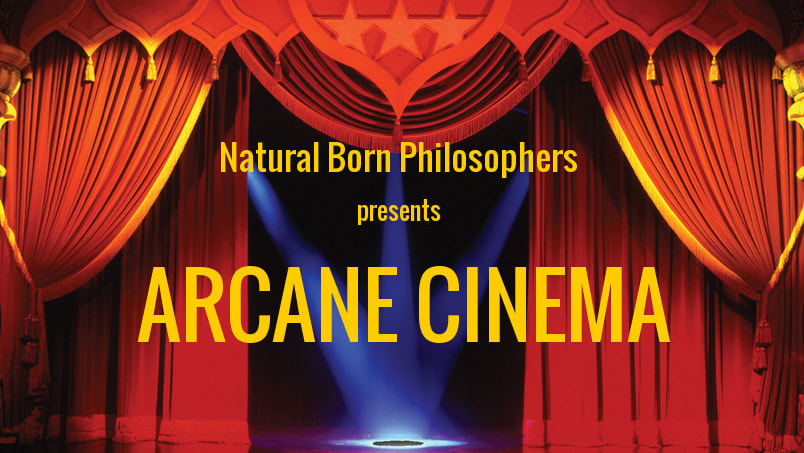 We are making our video series on the Major Arcana: Paths of Individuation & Soul-Making, available [below] for educational purposes. Our effort is to advance understanding of common themes in the collective art, heart, and soul of humanity.

We present a distilled visual alchemy of the The Fool's Journey in each encrypted card, each a retinal poem. A continuous narrative emerges through a discontinuous montage of film, documentary, and music video imagery and iconography.

Metaphors of the underlying order in chaos connect our departures from the ordinary world through impressionistic leaps of imagination with fiery hearts and luminous hair. The heart is the secret of the source of the perceptual eye. Names and latent symbols become omens. The characters of the soul help us see in the dark.

https://ionamiller2017.weebly.com/major-arcana.html
Archetypes as the core components of the human psyche. What does it mean if a soul is composed of archetypes as proposed by Hillman?

One more word we need to introduce is archetype. The curious difficulty of explaining just what archetypes are suggests something specific to them. That is, they tend to be metaphors rather than things. We find ourselves less able to say what an archetype is literally and more inclined to describe them in images. We can't seem to touch one or point to one, and rather speak of what they are like. Archetypes throw us into an imaginative style of discourse. In fact, it is precisely as metaphors that Jung—who reintroduced the ancient idea of archetype into modern psychology—writes of them, insisting upon their indefinability. To take an archetypal perspective in psychology leads us, therefore, to envision the basic nature and structure of the soul in an imaginative way and to approach the basic questions of psychology first of all by means of the imagination.

Let us then imagine archetypes as the deepest patterns of psychic functioning, the roots of the soul governing the perspectives we have of ourselves and the world. They are the axiomatic, self-evident images to which psychic life and our theories about it ever return. They are similar to other axiomatic first principles, the models or paradigms, that we find in other fields. For “matter,” “God,” “energy,” “life,” “health,” “society,” “art” are also fundamental metaphors, archetypes perhaps themselves, which hold whole worlds together and yet can never be pointed to, accounted for, or even adequately circumscribed. All ways of speaking of archetypes are translations from one metaphor to another.
Even sober operational definitions in the language of science or logic are no less metaphorical than an image which presents the archetypes as root ideas, psychic organs, figures of myth, typical styles of existence, or dominant fantasies that govern consciousness. There are many other metaphors for describing them: immaterial potentials of structure, like invisible crystals in solution or form in plants that suddenly show forth under certain conditions; patterns of instinctual behavior like those in animals that direct actions along unswerving paths; the genres and topoi in literature; the recurring typicalities in history; the basic syndromes in psychiatry; the paradigmatic thought models in science; the worldwide figures, rituals, and relationships in anthropology.
Hillman, James. The Essential James Hillman: A Blue Fire (pp. 23-24). Taylor and Francis. Kindle Edition.


"Archetypal psychology has pressed beyond the collection of objective data and the correlation of images as verbal or visual symbols. If archetypal images are the fundamentals of fantasy, they are the means by which the world is imagined, and therefore they are the models by which all knowledge, all experiences whatsoever become possible: “Every psychic process is an image and an ‘imagining,’ otherwise no consciousness could exist …” (CW 11: 889). An archetypal image operates like the original meaning of idea (from Greek eidos and eidolon): not only “that which” one sees but also that “by means of which” one sees. The demonstration of archetypal images is therefore as much in the act of seeing as in the object seen, since the archetypal image appears in consciousness itself as the governing fantasy by means of which consciousness is possible to begin with. Gathering of data does less to demonstrate objectively the existence of archetypes than it does to demonstrate the fantasy of “objective data.”  -JH, Archetypal Psychology, 204-21
CATCH 22 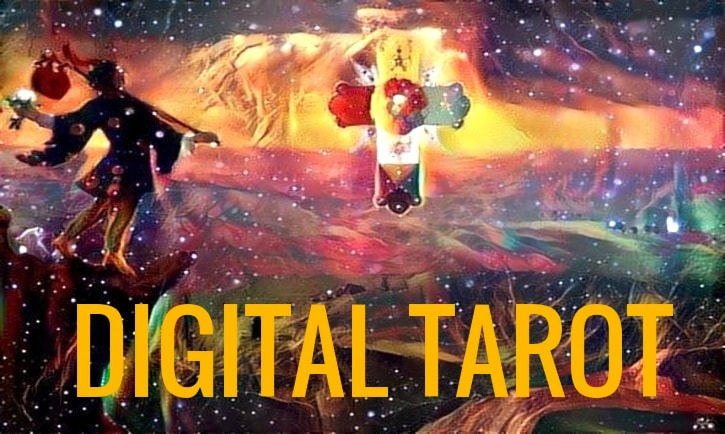 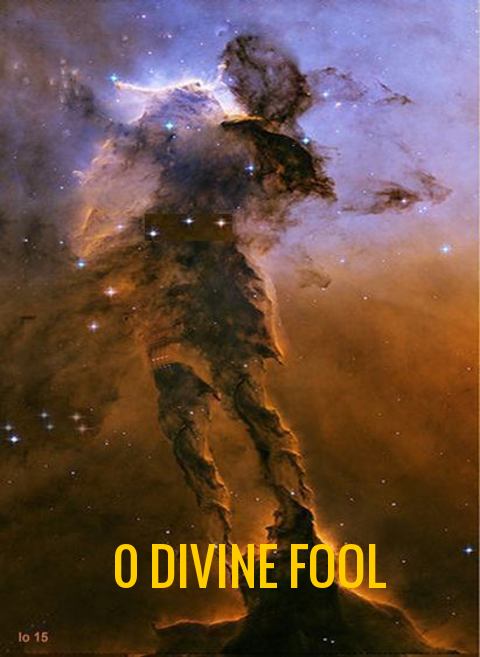 We are making our video series on the Major Arcana, Paths of Individuation, available in our efforts to advance understanding of common themes in the collective art, heart, and soul of humanity through the magic theater.

In Steppenwolf, Hesse describes the Magic Theatre as "not for everyone," a place where he experiences the fantasies that exist in his mind. The Theater is a long horseshoe-shaped corridor or labyrinth with a mirror on one side and many doors on the other. The middle-aged protagonist enters five of these labeled doors, each of which symbolizes a fraction of his life. It is not unlike choosing a film at a modern cineplex..

Both modalities, ancient tarot and modern cinema, have not been considered together in a suggestive or coherent framework as ways of making meaning. Both imply polymorphic gods, eternal metaphors of imagination, perspectives toward events which shift the experience of events.

Each divinity is a style of consciousness. Mythic stories embrace the whole potential range of character, not just those with whom we identify in cinema or tarot, because we believe they most represent us. Tarot and cinema are virtual arts or psychological realities for unveiling psychic multiplicity. The poetics of soul is a mythical method.

Tarot has often been a tacit or explicit point of inspirational reference in the arts, such as dance, literature, and poetry. Such images speak directly to our process of recomposing life into a new story. What we haven't yet discovered seeks its voice and embodiment in art, taking heart in the poetics of our depths. We work on psychic expression while psyche simultaneously works on us.

We explore insights and experiences of everyday life through film with Post-Jungian concepts of film, image construction, narrative, and cultural issues. A confrontation with fictional figures is part of the ancient mandate to 'Know thyself.'

Arcane Cinema does not have to be explicitly occult, mysterious, fabulist, religious, or mythological. It simply tells an archetypal story. But when it is explicit it can create social phenomena, such as 'The da Vinci Code,' or 'The Passion,' healing fictions which some mistake for historical truth, which is actually literature and art.

Wallace Stevens said, "The final belief is to believe in a fiction, which you know to be a fiction, there being nothing else. The exquisite truth is to know that it is a fiction and that you believe in it willingly."

That belief may not exceed the viewing period during which we voluntarily 'suspend disbelief.' Divination is much the same in this regard. We revision a path of psychic discovery in both domains. In his book Healing Fiction, James Hillman suggests asking, "What does the soul want?"

His answer, "Fictions that heal," implies we create our reality through fictions that are the source and illustration of both our soul life and 'illness.' They become 'healing' if we reclaim their intrinsic therapeutic function.

This basis of mind itself is the root of authenticity, which is truth that may or may not be 'real,' but helps us accept life as it is. Perhaps our biggest fiction is that our pathologies and dysfunctions can finally be cured, when they are central to our way of being in the world, including the psychic texture of fantasy and myth.

Images sustain and guide our conscious participation in the psychic world where healing is a life process that begins with our acceptance of our fictive realities that we create for specific independently originating psychic forces. The fictional mode is always in play as the pandemonium of images.

We 'go with' the story rather than interpret it. We do the same with our own fictive story, self-image, and narrative -- the stories we tell ourselves. This 'psychic logos' is the secret that opens our into our lives. Our mind composes itself and inhabits an art-space.

Cinema is metaphorical and implies transformative potential. Imaginative acts embody the faculty of transformation itself at the liminal margins of the psychological and literary. It can be noetic, numinous, and ambiguous -- but rarely historically accurate. Both film and tarot are selective fields of convergence that broaden our conceptual awareness and reveal the poetic basis of mind.

The orientation is self-exploration, not self-overcoming -- an imminent not transcendent perspective. The theory is transformational. The approach is imaginal, synchronistic, montage, dynamic multiplicity, a flow of signs, forms, and imagery, a representational language, a perceptual symbol system.

The film experience in the darkened interior is sensuous, affective, connective, relevant, meaningful, and intimate. Undulatory tonal harmonics, chromatic and triadic progressions, plot points, visual perceptions, and accessible emotions are the heartbeats of the storyline. We acknowledge the meaning it conveys, the pleasure it initiates, and the value it currently assumes for us. 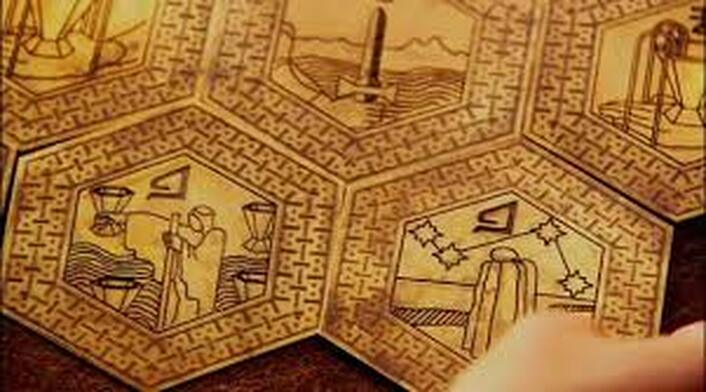